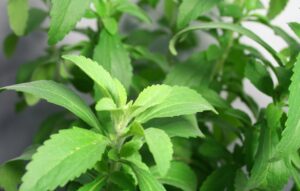 One thing you probably don’t need to hear from me is that sugar is bad for you-right? It suppresses the immune system, disrupts hormones, fuels the growth of cancer cells, encourages fat storage and weight gain…so surely you don’t need much more convincing to limit the sweet stuff as much as possible.

So then comes the question, what are the best sweeteners and substitutes to use instead of sugar? While sweeteners like maple syrup, honey and molasses, in moderation, are allowed on the Pegan and Paleo eating plans (which are plans I recommend to most of my clients), I’ve been experimenting more with Keto or zero calorie/carb sugars lately.

I wanted to create treats that won’t spike blood sugar which is very important for everyone, not just the person with ‘pre’-diabetes or diabetes. We need to remember insulin is a fat storing hormone and when it has to come marching out to lasso a bunch of excess glucose and store it somewhere, we’re in for a bit more padding around our bellies and hips! And it causes an inflammatory response. And I don’t know of anyone who wants that. So, let’s talk about the sugar substitutes we may want to use and mention the ones we don’t.

Starting with the basics. There are three groups of sugar substitutes.

This last group should be avoided but I wanted to list it here so you’re aware of what to steer clear of (even if the American Diabetes Association and some dieticians recommend them).

Stevia is a natural sugar replacement derived from a plant called Stevia Rebaudiana. It’s easy to grow and once dried can be ground into a fine powder. Stevia’s sweetness intensifies once the leaves ground into a powder. The sweetness can be 30 to 150 times sweeter than a regular sugar. This gives the advantage of just needing a pinch to sweeten. With its 0 calories, it’s a perfect sugar substitute, especially for diabetics.

How does Stevia taste? Fresh stevia leaves have a slightly sweet flavor to them, which is perfect if you would like to use it for your freshly brewed coffee or infused tea.

There is slight bitter aftertaste if you do consume a larger amount. Therefore it’s not advisable to use stevia alone for baking or cooking.

A mixture of other sweeteners such as erythritol together with stevia gives a great combination of volume and taste, making it easier to use as a 1:1 sugar substitute.

One of my go-to favorites as a erythritol/stevia combo is Swerve or a less expensive option is from Thrive Market.

Erythritol by itself is the second most favorite option for me.

For a long time Erythritol was the base for all of the Keto baking. It’s a sweetener that falls within the group of sugar alcohols. It’s 60–70% as sweet as sucrose (table sugar) yet it is almost non-caloric, does not affect blood sugar, does not cause tooth decay, and is only partially absorbed by the body.

Because it’s not as sweet as sugar, you’ll need to use a little extra than what the recipe calls for.

Note: sugar alcohols can sometimes cause digestive upset but is much less prevalent with erythritol than xylitol or sorbitol. I personally cannot tolerate either one of these but do well with erythritol.

Allulose is a low-calorie sweetener that bakes and freezes exactly as regular sugar does.

Allulose is a fairly New Kid on the block, commercially (since 2018) but seems to be a great substitute in Low Carb and Keto baking especially. It does not affect blood sugar or your insulin levels.

Allulose usually doesn’t cause bloating, or stomach issues, if eaten in greater amounts, as Erythritol or Xylitol can and is much more user friendly for those with SIBO.

Its sweetness is about 70% sweet compared to the sugar, so keep this in mind when using it. Always add a bit more if you are trying to bake with recipes using normal sugar. The Allulose substitute is the closest in taste to normal table sugar.

Monk Fruit is very popular in Asian countries, and was first used as a part of Chinese medicine for relieving cough, sore throat, or bronchitis. The pleasant sweet taste was an additional benefit.

Similar to Stevia, the sweetness gets up to 250 times stronger when compared to sucrose (sugar) and therefore is mostly available in a mixture together with other sweeteners.

I would compare the taste of the dried monk fruit to a mixture of raw sugar, molasses, and cane sugar with a slight aftertaste.

The last on the sweetener horizon is how to make a Powdered Sugar Sweetener? Don’t have powdered sweetener at home but need to make frosting? No need to run to the supermarket and buy one. Instead, take any one of your granulated sugar Sweeteners and grind it to a powder in either a Magic Bullet or Coffee Grinder.

And don’t forget to be an avid label reader to find hidden sugar in unexpected places. Don’t believe me? Take a look at your ketchup, spaghetti sause or BBQ sauce. This is actually a great activity for kids. It lets them be detectives and also become more aware and important.